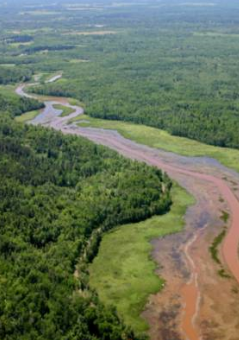 The City of Superior, WI is surrounded by water. It is situated on the western-most point of Lake Superior and is bordered by the St. Louis River, the largest US tributary to Lake Superior. The waterways that flow through and around the city are rich with fish, waterfowl, and recreational opportunities. Seven main streams twist and turn through the city limits before entering Lake Superior, the largest of the five Great Lakes and the largest freshwater lake in the world (by surface area). How many Superior Streams can you name?

These urban streams serve double-duty as naturally occurring aquatic habitat but also as part of the City of Superior's stormwater conveyance system. Have you noticed a storm drain or ditch in front of your home or business? That drain or ditch directs rain and snowmelt off roads and properties to prevent flooding, and channels the stormwater, typically untreated, directly to the nearest stream or lake. This means that your curb and gutter are essentially lake shore property. Superior residents can protect Lake Superior and local streams by properly disposing of litter from your property before it gets to sidewalks and streets where it's carried by stormwater to our local streams and Lake Superior.

Learn more about the Superior Streams here, or download a Waterways of Superior, WI brochure!

Get your feet wet by joining the City of Superior's Stream Monitoring Program.

We are always looking for volunteers who want to keep our streams and Lake Superior clean by joining the City's Adopt-a-Drain program. 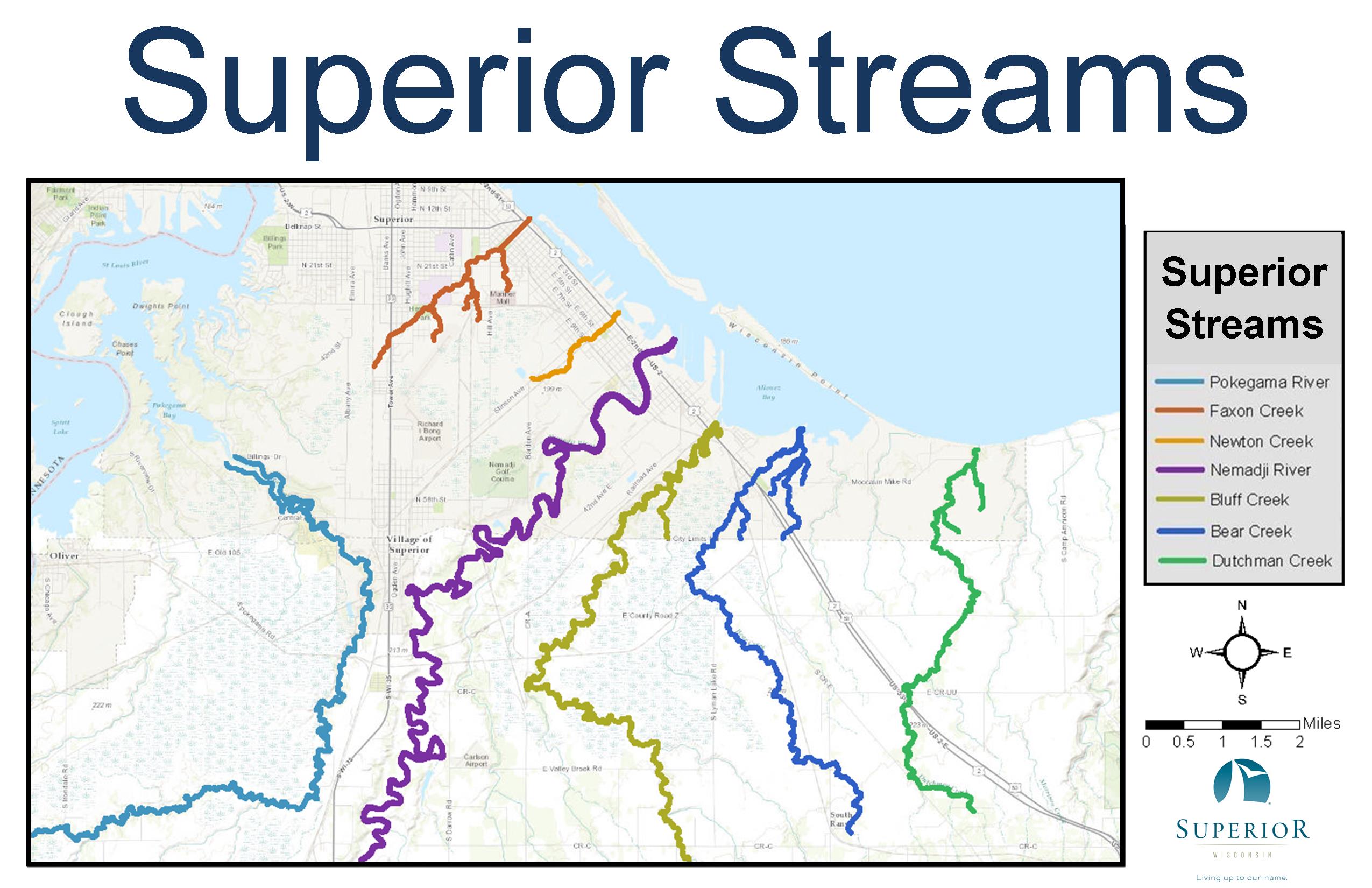 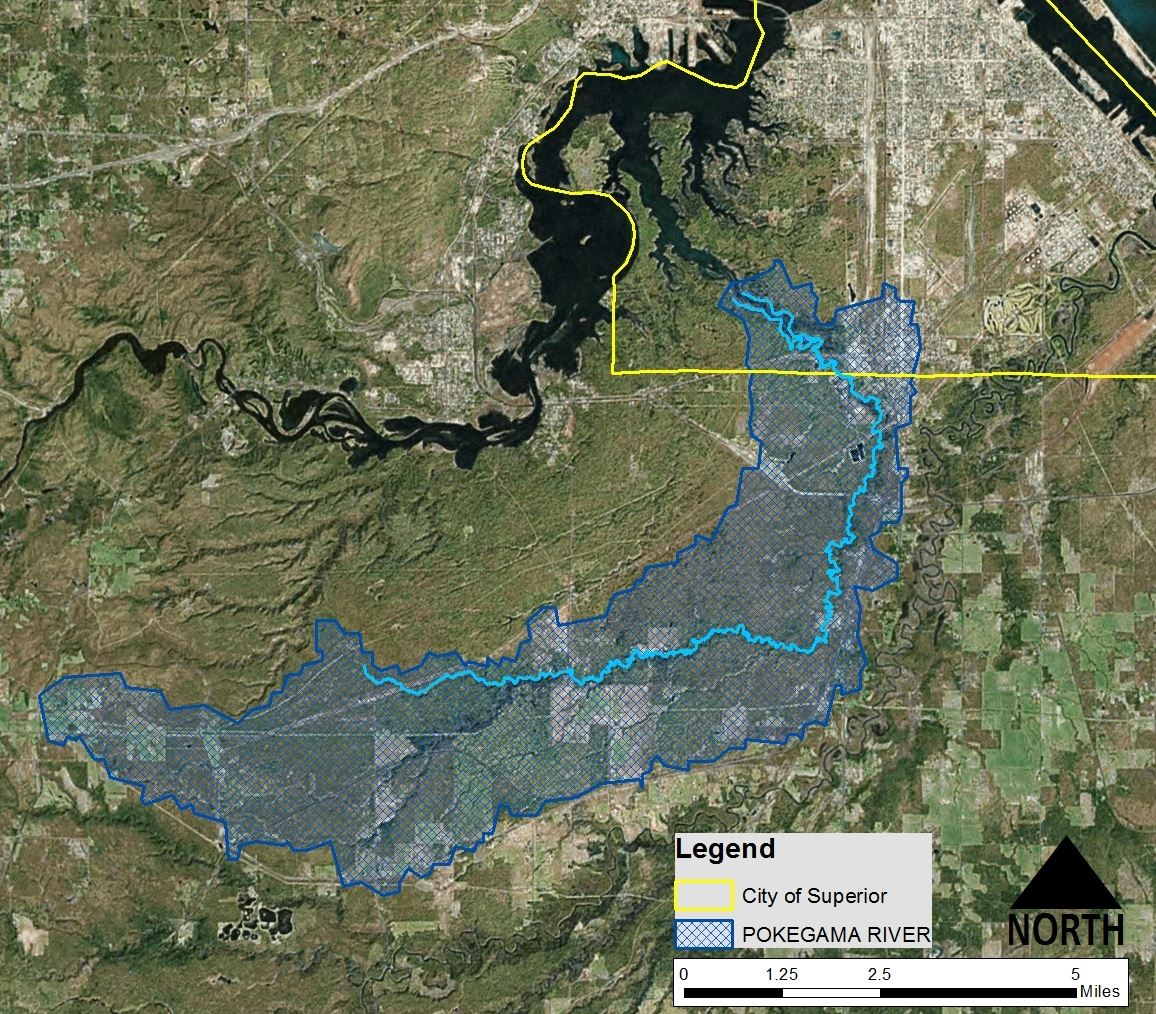 The Pokegama River is nearly 26 miles long and originates in the Pokegama-Carnegie wetlands near the Wisconsin/Minnesota border by Jay Cooke State Park and enters the St. Louis River in the City of Superior, near Dwight's Point (part of the Superior Municipal Forest). The Pokegama River provides important spawning areas for walleye, northern pike, longnose and white suckers, burbot and more.

Learn more about the Pokegama River and Dwight's Point on the Wi DNR website.

Faxon Creek is about 3 miles long, draining wetlands near Tower Ave and 39th St. as well as wetlands on the grounds of the Richard Bong Municipal Airport. It flows northwest through three campuses, including Northern Lights Elementary School, the University of Wisconsin- Superior, and Superior High School, as well as heavily developed residential areas. Faxon Creek is channelized underground for its last half-mile before feeding into Superior Bay near Barker's Island.

Faxon Creek flows through some of the most developed areas of the city and its riparian area (the buffer of plants between the stream and upland areas) has been almost completely removed. Monitoring data show that the stream becomes murkier (more turbid) and more polluted the closer it gets to Lake Superior. Faxon Creek is listed on the Wisconsin DNR’s Impaired Waters list due to Degraded Biological Communities. 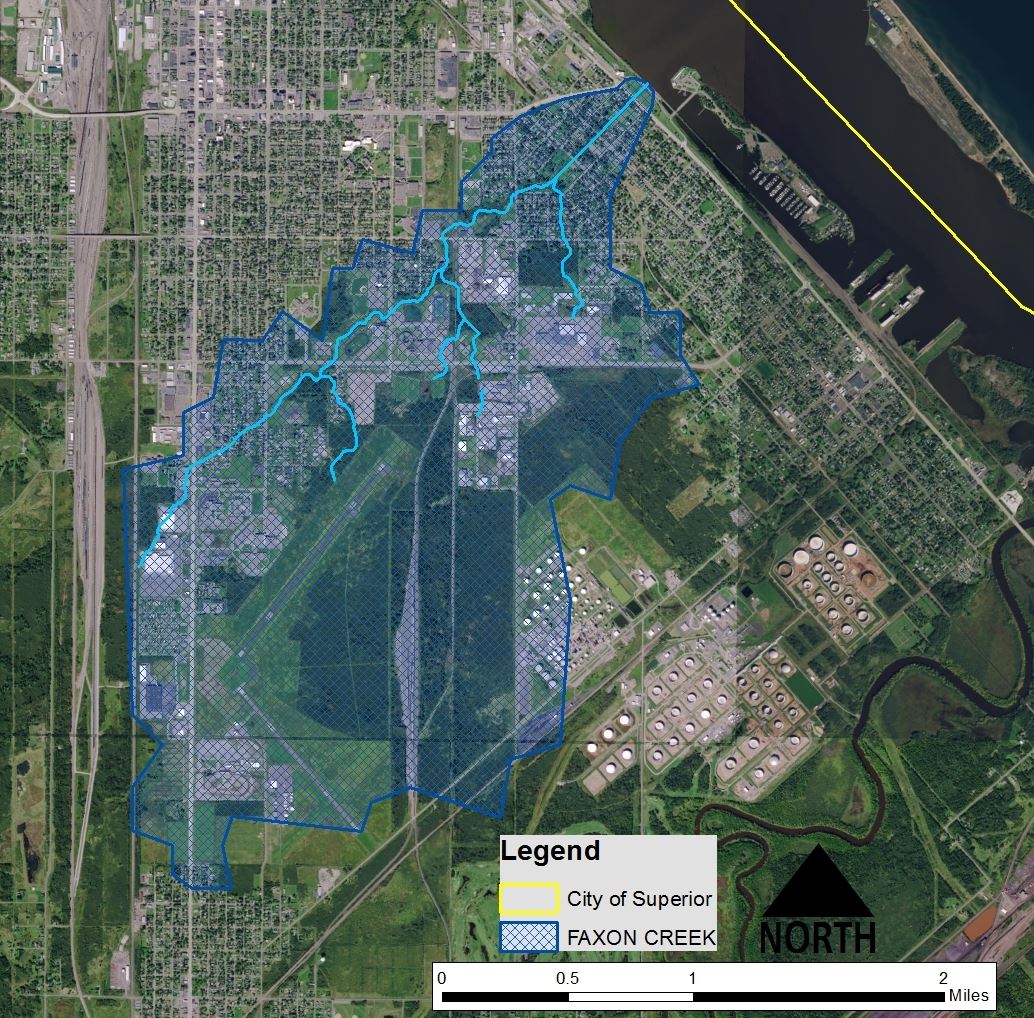 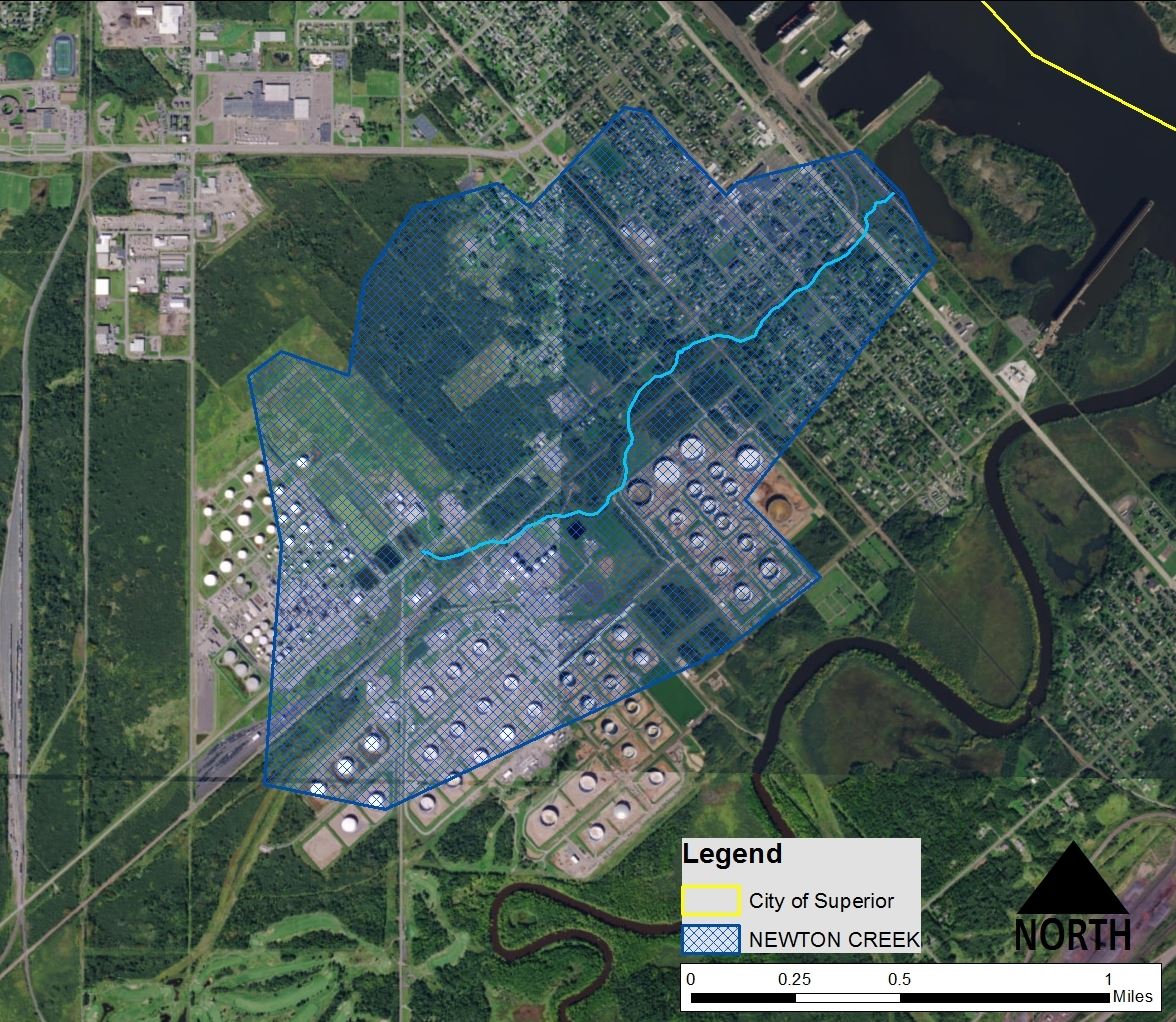 "Nemadji" is from the Ojibwe language, meaning left-hand river—when traders approached the west end of Lake Superior, the mouth of the Nemadji was on the left; to the right was the estuary of the St. Louis. The Nemadji River bends and turns for 65 miles in both Minnesota and Wisconsin, passing through highly erodable clay and sand soils. Some bends were cutoff naturally over time and small oxbow or horseshoe lakes have been made. There are nearly 27,000 acres of wetland in the Nemadji watershed.
Currently the mainstem of the Nemadji River, from its headwaters to the Wisconsin border, and two tributaries do not meet water quality standards for beneficial uses such as aquatic recreation, drinking, and swimming due to a turbidity impairment. In this watershed, turbidity is associated with suspended sediment. Nearly 33,000 tons of sediment are discharged from the Nemadji to Superior Bay annually.


Learn more about the Nemadji on LakeSuperiorStreams.org 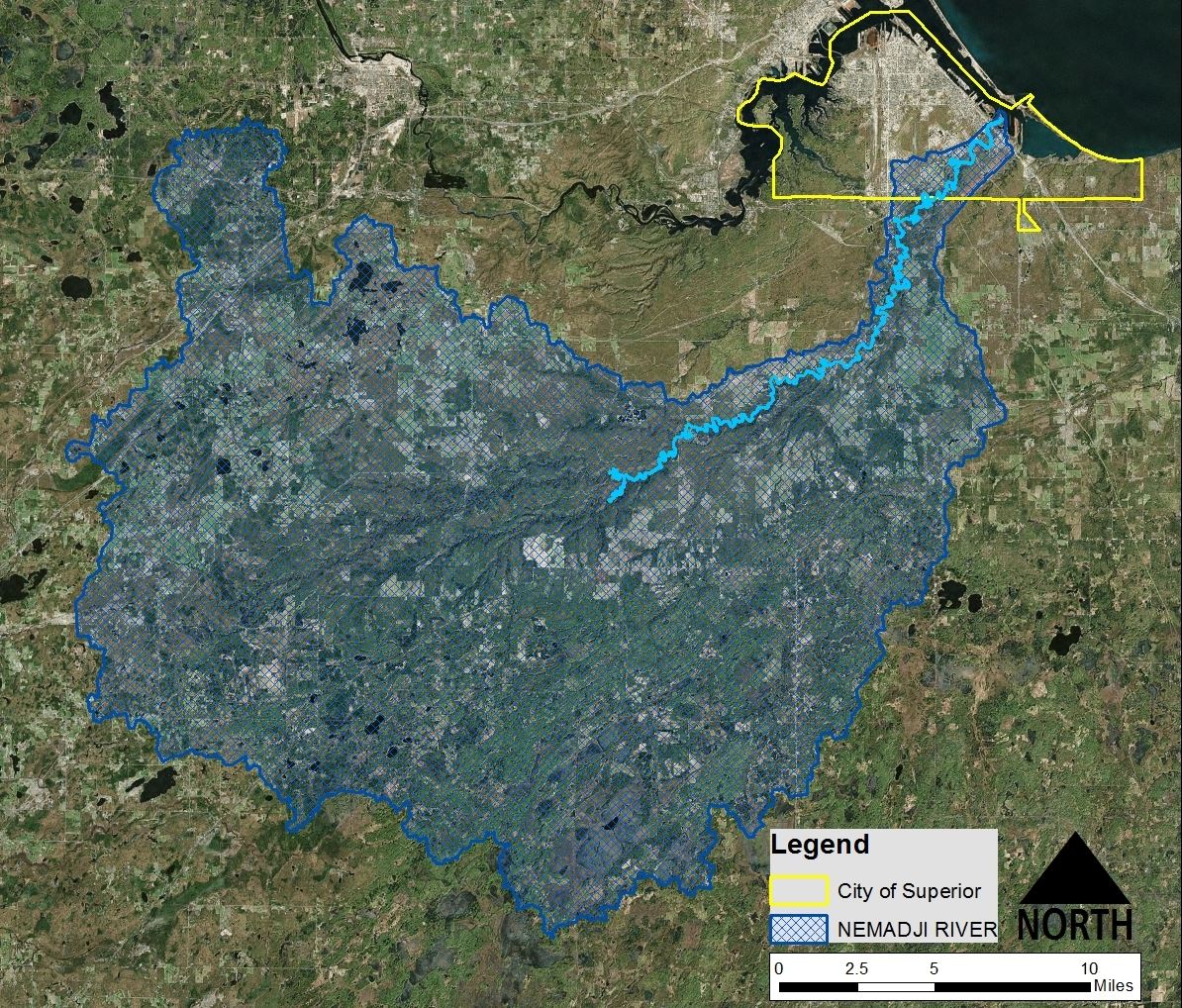 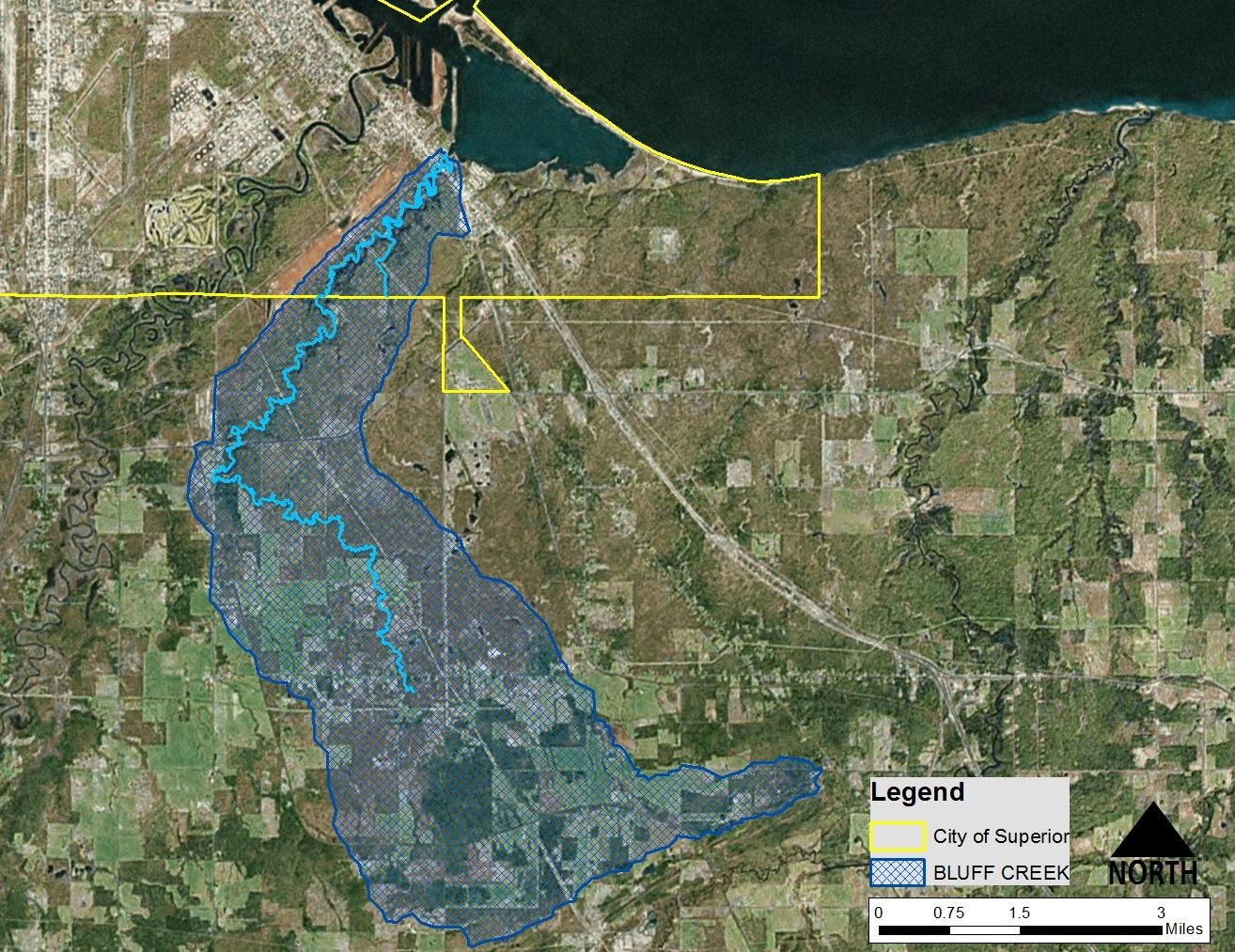 Bluff Creek (also known as Allouez River) travels about 18 miles, passing through Superior before flowing into Allouez Bay. It is an intermittent warm-water runoff stream. Frequent flood events in Bluff Creek are common. The mouth of Bluff Creek is an important spawning area for northern pike and other warm-water species.


Bear Creek is a small tributary, entering Lake Superior at Allouez Bay in Bear Creek Park which is off 2nd St. near Moccasin Mike Rd. It had previously been classified as a limited forage fishery; however, the mouth of Bear Creek is an important spawning area for northern pike and many other warm water species, so a more appropriate classification of Bear Creek from its mouth upstream to U.S. Hwy 2/53 (river mile 1.3) would probably be as a warm water sport fishery (WWSF).
A portion of the stream is intermittent (contains surface water during high flow periods following rain and snow melt). The mid and downstream sample sites flow through wooded areas and contain exposed rock in the bed of the stream. The upstream site flows through a pasture and the bed consists of soft sediment with no exposed rock. 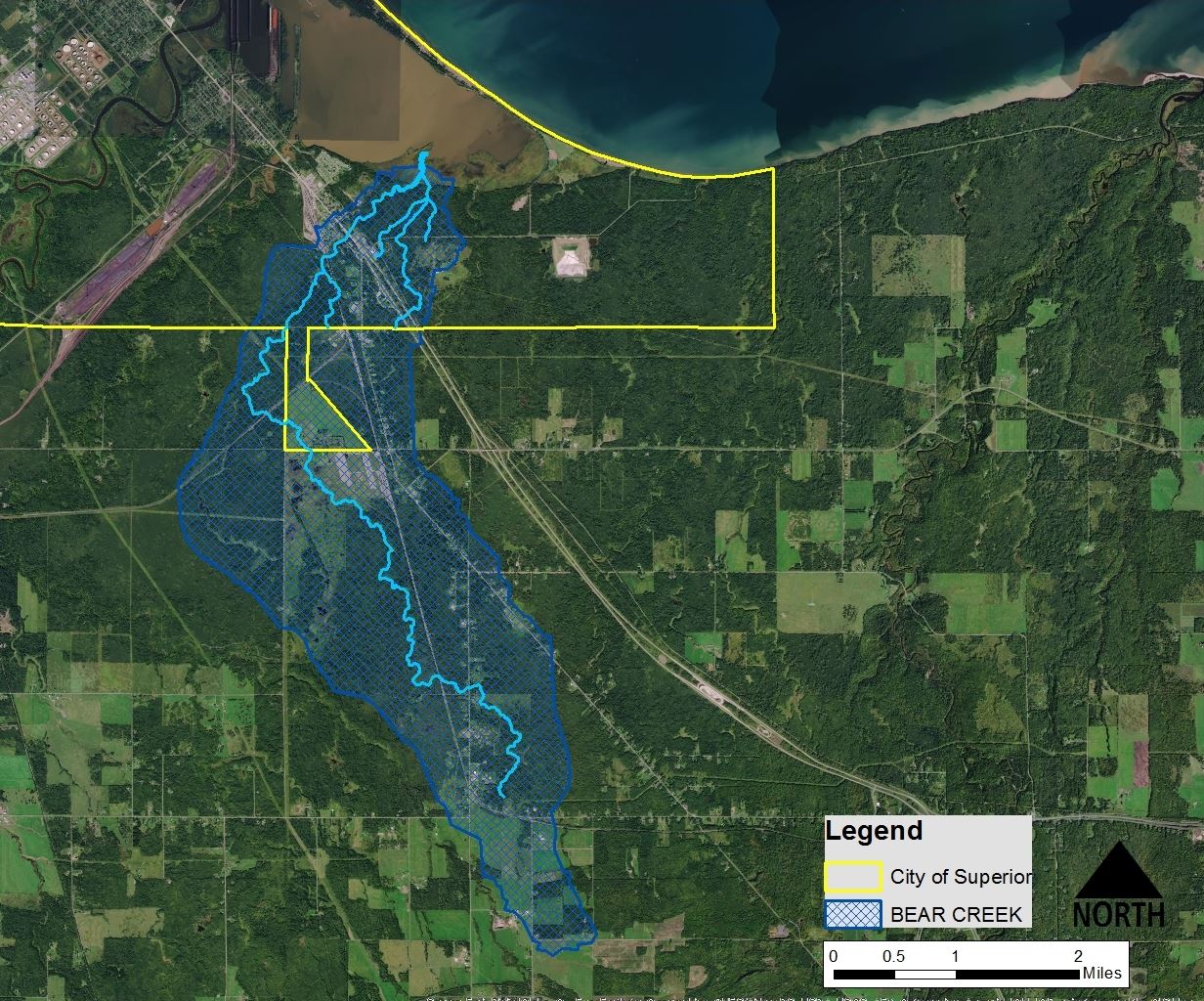 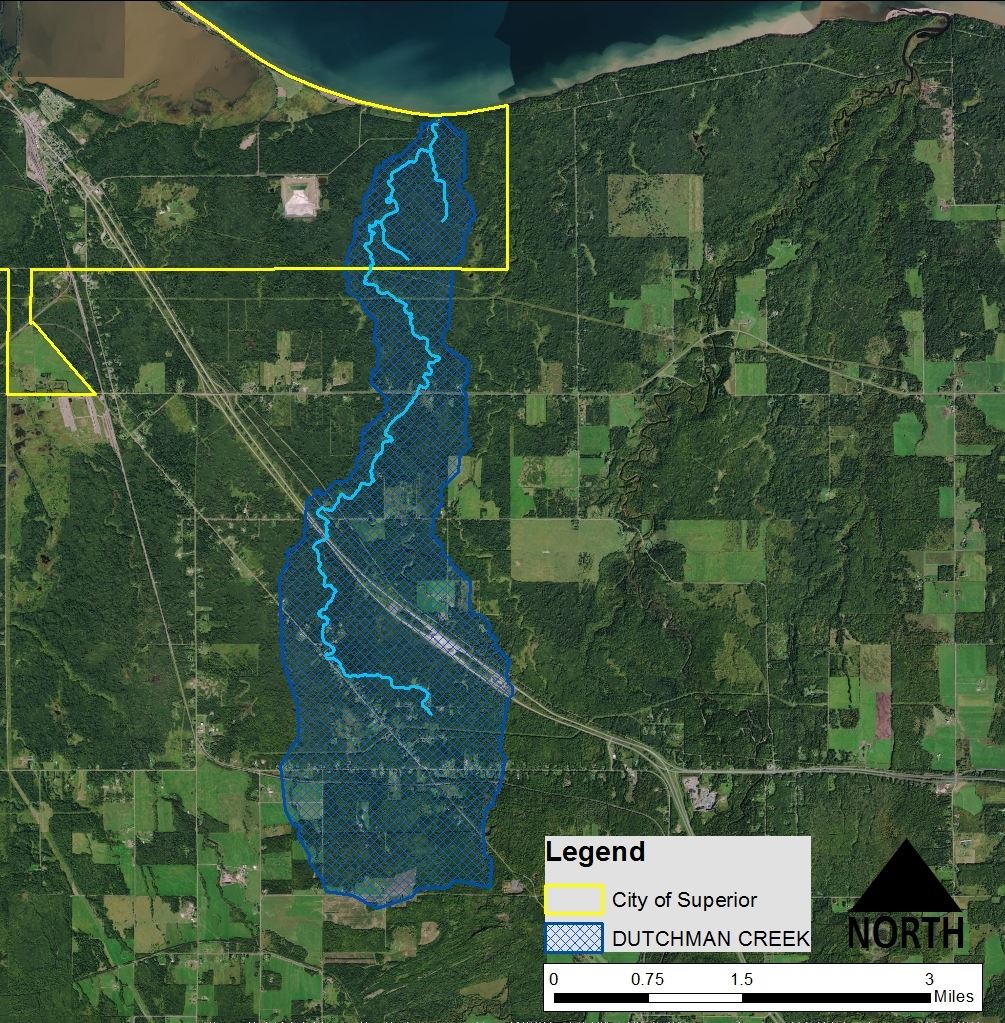