Primary Treatment is a physical process. The purpose of primary treatment is to slow the velocity of the flowing wastewater enough to facilitate the settling out of heavy solids.

Long-chain polymers are often added to improve settling. Floating constituents like grease are easily skimmed off because they coagulate and form floating masses. Primary treatment removes about 45% to 65% of the suspended solids and dissolved organic material as measured by biological oxygen demand (BOD). The accumulated solids are removed from the tanks and pumped to anaerobic digesters for further treatment.


Secondary Treatment is a biological process and is the heart of the treatment facility. It consists of two parts: the aeration tank and the final clarifier.

The Aeration Tanks cultivate thriving populations of microorganisms (“bugs” and algae) by providing oxygen to the primary sewage (“bug food”). This is an aerobic (oxygen based) biological process. The wastewater is aerated in the tank and the microorganisms use the organic compounds for growth, producing more microorganisms, and for respiration, which results primarily in the formation of carbon dioxide and water. 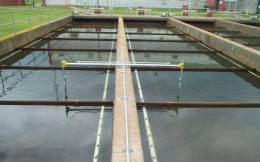 
The Final Clarifier allows settling of the solids (primarily microorganisms) and their removal from the water column. The “bugs” are either returned to the aeration basin for further use (Return Activated Sludge), or wasted to the anaerobic digesters (Waste Activated Sludge). When the water is discharged from the final tanks, approximately 97% of the BOD has been removed. From this point the water flows to the chlorine contact tanks for disinfection